Talkster is a free phone service which has been around for a while. It supports free calling for over 25 countries at this point, although the list is growing pretty fast. 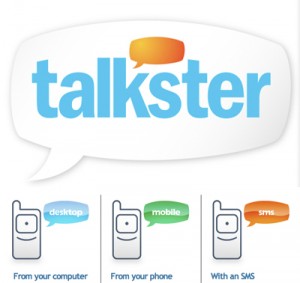 The free calls are supported by 10-second at the beginning of each call. Calls can be placed via a computer, a mobile phone, or even an SMS! Talkster even supports conference calls.

Open Source software gives us the freedom to choose. And like every other case, with freedom, comes the responsibility of making decisions for yourself. Some find it easy, some find it a hassle – but it is a necessity.

Selecting the software that will suit my needs best is an ongoing process. In the Open Source world, programs are updated every day – unlike the proprietary world where the company releases updates once in a while. So, one has to keep up with the new features and pick the ones that are most useful. That also means, this list may change over time…

Here’s my list of software, each given with the purpose I use it for. Now, there’s a catch – there are a few programs that are installed as dependencies (other programs need them as supporting programs) which I might not mention, but will be installed automatically.

FreeBSD/ PCBSD: These are not two different operating systems, FreeBSD is the original lean mean serving machine aimed at large servers and geeks amongst us. PCBSD is a sugar-coated avatar of FreeBSD, aimed mostly at the casual user. I love FreeBSD (and PCBSD too) for its speed, efficiency and most importantly the documentation and software installation/updating methods. Also, using FreeBSD also makes me feel happier!

KDE looks and feels the best. Though it is not lightweight as compared to other software, it just “Feels right”. Also, I like the Qt Toolkit which forms the base of KDE. I have Gnome installed, but only as a dependency for some of the software that I use.

Photo management is not (yet) fun on FreeBSD. DigiKam is by far the best software that I have come across. However,in my humble opinion, it has some serious user interface issues. I’m hoping they fix it soon. I would like to try blueMarine but it depends on Java and I’m allergic to Java. I tried installing it but somehow it doesn’t want to work… anyway, both softwares lack one very important feature that I need as a photographer – non-destructive editing. So I’m more or less undecided about what software to use. Picasa for linux doesn’t work on my system even with Linux compatibility layer on. Picasa for windows doesn’t work with Wine. I’m yet to try Adobe Lightroom with Wine.

I prefer a simple editor for basic retouching needs inside the photo management software, however, anything complex calls for a complex software – GIMPShop (this is a fansite – the official site does not seem to be very useful…). It is a variation of the original software GIMP – made more sensible and easier to use, and looks a bit like Adobe’s PhotoShop.

For adding watermarks to images before uploading to the big bad Internet, I use ImageMagick, a collection of command line tools that make batch editing a bunch of photos pretty easy.

KDE comes with a good assortment of Personal Information Management software… and since they integrate well into the desktop environment, I prefer them over other software.

Music is a geek’s basic need. Sitting at the computer for hours makes you grumpy and irritable – and having a software that hassles you just to listen to some good music is the last thing you want! Just get AmaroK, and stop worrying about music. It will assist you in whipping your library into shape with inbuilt support for MusicBrainz for automatically tagging popular tracks. It can also rearrange your files in a neat filesystem hierarchy if you wish. Has support for Magnatune, a fantastic music store that lets you listen to and download full preview tracks for free. The list goes on and on – AmaroK can be called “THE” software for all your music library needs.

I’m not a big fan of video, since it makes me wait and look at screen while people take their own time to ramble on about stuff… passive entertainment, which makes you wait. OK, movies once in a while are perfect – I love good movies, so there must be a way of watching them too. KMPlayer does a great job of playing almost any format that I can find. It is a front-end to MPlayer – which works behind the scene.

There are two packages that I switch back and forth between – KOffice and OpenOffice.org. Both of them are excellent, but I find one useful for a particular task and other more convenient for some other work. Until one of them becomes more suitable to all the stuff that I deal with, I have to carry the extra baggage!

When the above programs fail to deliver or where the task it trivial, and using any of the above software is going to be more hassle than needed, I prefer writing quick scripts in Python. Along with Python, I use Qt Toolkit via PyQ. Editing is mostly done in Kate for all trivial scripts. Larger projects use Eric3 as the IDE.

DVDisaster is my new favorite! It does some neat tricks to protect my DVDs and CDs and it also reads as much as possible from the already b0rked media! Way to Go!

This change can be called as a Birthday Gift for my subdomain “pbx.homeunix.org”. It celebrated its first year on 27 Feb 2007. The website though, has evolved through 9 years (since 1998) and has found itself on many different domain names, using various technologies for delivering content. It is rightly said “The only thing constant, is change.”. So today we move on to another technology…

This post is being made through the fantastic content management system called WordPress. You can check it out on http://www.wordpress.com/. I have tested it for more than 6 months, and I seem to like its simplicity and its power, rather the power hidden behind its simplicity! In the last 9 years of the existence of my website, on various domains under various titles using various content management systems… I have found that if a website can be edited “at whim”, there’s a better chance that it is updated regularly! What else gives itself to such purpose than a blog? Yet WordPress is not just a blog… is has facility to make static, hierarchical pages – just like a regular website. Hence m choice.

Another reason for selecting WordPress – though I like to have a fancy CMS, but I don’t like the cluttered look and feel of most of the content management systems we have around. This is a website devoted primarily to photography, it should be simple and straightforward because its audience includes mostly people who are not concerned with stuff like “CMS”, “Subversion“, “PyQt4” and “FreeBSD“. They usually don’t really care how many guests and registered users are online. They probably don’t want to know what version of software I am using. Infact, they don’t want to be bothered by this post either!

WordPress lets me keep other pages in the front, and hide the blog away – for the really enthusiastic people. Also, an important feature – I can embed Gallery2 into WordPress, making the experience of browsing this website as seamless and painless as possible. This post is actually “behind the scenes” – the website is still showing the “Website Under Maintenance” page… once I finish setting up the plugins and skin for the site, I’ll lift the curtain. Hope this change is a pleasant one. Apart from the broken links, there should not be much trouble – though I’ll try my best to make proper redirects ASAP. And friends, thank you for your patience, support and encouragement! Keep rocking.